January 01, 2022
I'm not much of a new year resolution kind of person. I do what is needed, when it's needed, to get to where I need to be.
But of late, I've found myself in an incredibly privileged position of having time, energy AND resources to do not only what I need to do, but also the things that I want to. I can play the video games I like, buy the things I like, travel the places I like - all these things I want to and more - without negatively affecting any of the things that I need to do (responsibilities of various forms).
It hit me with a massive realization, that not many people - not only the ones alive in modern era, but even the ones that are now part of history - regardless of their power, riches or fame - have had this much amount of degrees of freedom & learning/growth opportunity in their lifetime. For that, I find myself to be incredibly fortunate, and that also makes me restless. Cause if I don't turn this opportunity into something useful, something worthy, with some form of takeaways, then I'm potentially wasting & insulting the opportunity I've been given.
With that said, it's not easy to determine what's the best use of a time (so that I'm doing the maximum justice to it) if it's completely up to me to decide. It's a subjective decision. So I asked myself, if I had endless amount of time, what would I do with it? And the answer came pretty quickly and definitely - learn everything there is to know. Confidently try out new things for the first time with total child-like excitement; not be afraid to fail, make something out of it, document/capture the moment in time, and then move on to the next one.
So, that's what I'll do.
New year has much less to do with it, except for acting as the lap marker to denote passage of time. But starting 2022, I've decided to take up a hobby project each week. I'll note them all in this post. If any of them deserve their own post, they'll be linked from here, as such. 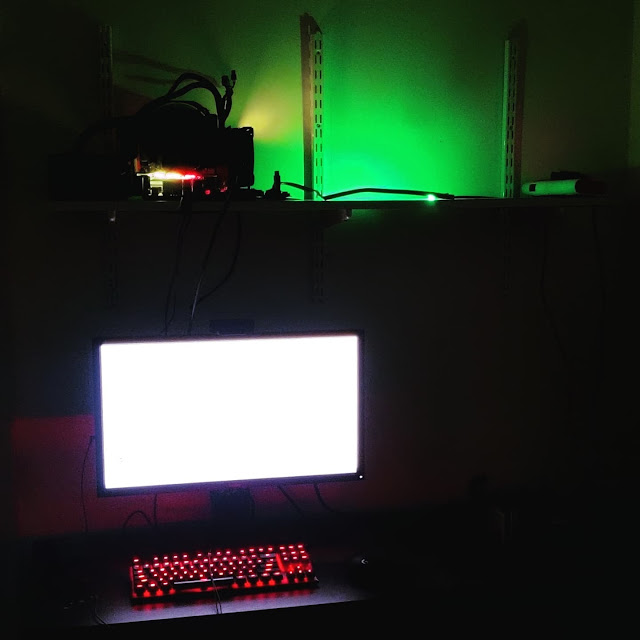 This one was long overdue (since Feb 2021). Soon after I finished my double-decker PC chassis out of acrylic, I realized that I can do better to reduce the system footprint & increase working desk-space. Wall mounting ATX motherboards with VESA adapter could work for lighter systems, but won't work for my daily drivers with Noctua coolers and RTX GPUs. So, a bit industrial solution was required.
I got the MDF storage racks for the purpose, cause it's cheaper that way, and way more flexible for whatever purpose. A dedicated server rack costs 10x-100x more than that. Had to use a lot of elbow-greases to shape it into the way I'd want to (excess material became a separate normie storage rack for the family).
There are a lot to learn (at least for me) while working with physical things. For e.g. while drilling holes, it's way more import for the brackets to be vertically aligned perfectly (so the slits match with each other at same z-height) than, let's say the granularity of their horizontal spacing. Realizations of these factors (or lack thereof) may make a job 1hr or 6hr long (or worse, require multiple attempts).
I can mount 2 dedicated high-performance systems on top of it. One is my existing daily driver (7700k on z270 with RTX3080), the other one is the new Alder Lake system that's in the making currently (awaiting Noctua's mounting bracket to be delivered). Some cable management, accessories & switching hubs (USB & HDMI) will have to be integrated, but now I can completely run 2 systems with 2 monitors on the same desk without anything being cluttered or clumsy.

Moumita's old desktop had given up. She didn't diagnose the problem, but ended up stashing the entire PC. I took that up last year from her place to perform some necromancy, and as the first step, found out the SMPS itself was faulty (fingers crossed that the actual PC - a 2006 AMD athlon system - may actually be totally alright).
Following the power path, I saw that the fuse is blown & rectifier diodes shorted (2 mismatched pairs, the ones with lower current rating were fused). Replaced the fuse with an 8A one (should've used 1A or 2A as an afterthought), replaced shorted rectifiers with some chonky MUR460 that I had in stash. Powered on, and it immediately blew up the fuse & triggered my room's MCB.
So the problem is somewhere deeper. Started checking the inner circuits & found the switching transistors (or at least one of them, due to the configuration, can't be sure while it's still soldered on) was shorted.
At this point, after looking at the SMPS topology, I already didn't have much intent to fix it. Let me explain... It was not designed by a noob. It was designed by an expert who was given bonus based on how cheap they could make the BOM (bill of material) and yet the PSU could still pass the QC tests. Also the power ratings are too low for its form factor (even the 12V rail barely gives 200W). The switching transistors weren't even power MOSFETs. They were D304X NPN BJT transistors. So, that means it operates at a very low frequency, entire design has little to no regard for efficiency (obvious from the fact of using diodes as rectifier). So, replacing them (with MOSFETs, cause who in their right mind keeps 400V capable NPN BJT power transistors?) would've been a massive pain & possibly downright incompatible. But I needed to definitively know/diagnose the issue & then decide what to do.
After desoldering the transistors, I immediately found out the remnants of past blast, and it was barely held together because of the screw & thermal paste. That's it then...
So, now that I knew that the solution to the problem is costlier, time consuming & potentially hazardous (D304X is not even available anymore, and similarly rated BJTs are unicorns right now) than a brand new 200W PSU - there were practically no reason to bring it back to life except for virtual street-creds, which I'm not after. I'd rather use the functional parts as donor to fix other power circuits. 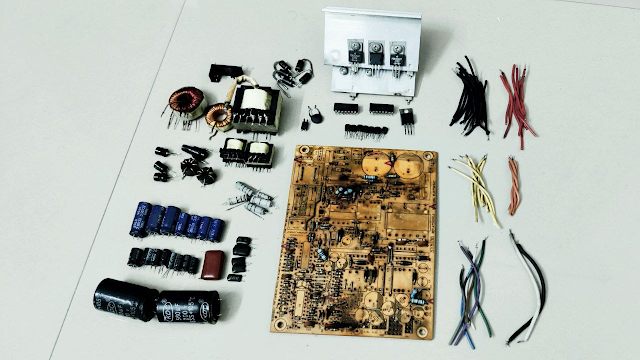 Here are the parts that I thought were worth salvaging for future usage. Especially the magnetics & capacitors, diodes, optocoupler & MOV can totally have a second life. Not so sure about the transistors & the oscillator & regulator ICs. Newer circuits barely use them, in discreet form at least.

Week 3: power solution for the workstations

A 2kVA line-interactive UPS with 2x12V 28Ah Lead Acid batteries, integrated bespoke surge protector along with 7-segment LEDs to display realtime power utilization, voltage regulations etc. to form a decently buff power protection and backup for my primary & secondary desktop workstations.
It's not super over the top. In fact, given that the systems are extremely power hungry at full load (RTX 3080 & RTX 3090 GPUs along with 7th Gen Core i7 & 12th Gen Core i9 processors) it's actually fairly modest for the purpose.
UPDATE (June '22): I'm still on track with one project per week. In fact, I have a buffer of 3 projects, so even if I just sleep for an entire month, I'll still not technically be failing the SLA. BUT, as the overhead of documenting (taking pictures, taking notes, drafting sections etc) eats up the time that I can rather use for more projects in succession, I've decided to discontinue writing about all the projects (may still cover a few, if something extra interesting comes up, that deserves a special spot). Not ideal, not super happy to make this choice and I may decide otherwise later, but for the time being, my priority is to turn over as many new projects as I possibly can. So if documenting them negatively affects the throughput itself, it has to take the backseat.
UPDATE (December '22): The target of 52 personal projects were achieved long back (late September, when I took an extended vacation from work before+during Puja). I am actually continuing with the projects. At this point they're not something I force or struggle with; they just happen. As most of the projects are setup & improvement efforts for the breakerspace (yup, that's what I'm calling it... stay tuned for more), it has an accelerated effect; as I make/setup more things, later projects get even easier (lower friction) to pick up & get going. The amount of time and resources I've invested in exploring the ecosystem, and the amount of things I've learned - it'd be a shame of a massive wasted potential to not take them seriously & put them to work.